My first office on The Wonder Years circa 1989. Photo copyright the author.

January 19, 2015 – Life is a series of moments—some casual and small, others significant and profound. And sometimes, a tiny, passing and seemingly insignificant instant will turn out to be a seed that flourishes and forever alters the course of our lives. One such moment happened to me in February, 1988, when a friend from my then wife’s acting class, John Rocha, asked if I’d happened to catch a show that premiered after the Super Bowl the previous Sunday. I gave him my signature raised eyebrow that clearly said, “Why would I be watching the Super Bowl?” so he went on to tell me a bit about this hysterically funny and profoundly touching new series. It was the first time I’d ever heard of The Wonder Years, and, as fate would have it, certainly not the last. I’ve written about the exhilaration of getting my first professional television writing job before, but with the recent release of the entire series on DVD, I’d like to revisit a few omitted tidbits:

First, it almost didn’t happen at all. Let me rewind a bit…

On John’s recommendation, I tuned in for episode #2 entitled “Swingers” which was written and directed by the series’ creators, Neal Marlens and Carol Black. I was immediately smitten with the show’s universal appeal. In the episode, Kevin Arnold (Fred Savage) and Paul Pfeiffer (Josh Saviano) are hell-bent on getting a copy of Everything You Always Wanted to Know About Sex But Were Afraid to Ask after a particularly hilarious but Saharianly clinical and decidedly un-educational sex education class. And the thing is, I felt like I was watching my own childhood. Which was, of course, one of the secret’s of the show’s huge success. We were all Kevin Arnold, after all (or, in my case, Paul Pfeiffer). 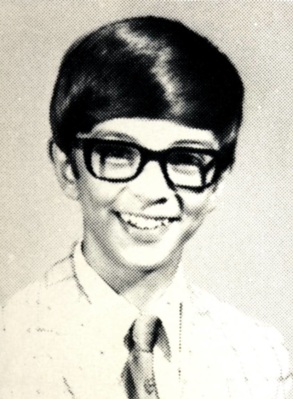 Yours truly looking my most Paul Pfeiffer-esque.

In the case of “Swingers,” the episode vividly evoked the burning curiosity, confusion, and pure, wanton lust of raging adolescent hormones. I remembered my own furtive excursions to the Magic Market where I’d try to peek at Playboy and Penthouse and Oui, only to be chased away by the watchful cashier. I recalled vividly when I finally got my hands on a copy of EYAWTKASBWATA after snooping through a neighbor’s nightstand (while babysitting their sleeping kids) and finally getting some informative and titillating answers—hey, I never said I was proud of it. The thing is, having been born just two years after Kevin Arnold, this show was a spot-on reflection of my own adolescence. For me, The Wonder Years was the proverbial love at first sight—the equivalent of that moment in the pilot when Kevin sees Winnie Cooper walking toward him at the bus stop wearing a miniskirt and go-go boots.

As that too-short first season (only six episodes) went on, the show took up permanent residence in my heart, and about half-way through season two, I had the temerity to try my hand at writing an episode on spec. It was inspired by a long ago family vacation in Myrtle Beach, South Carolina, when I was fourteen or so and met a beautiful blonde girl a year my senior while blissfully raft-surfing in the ocean in those pre-Jaws days.

The actual photobooth picture that inspired “Summer Song.” And yes, the tan is real. Photo copyright the author.

Our forty-eight hours together were a hokey movie montage complete with a soundtrack by Seals & Croft, four silly poses in a photobooth, arcade games, amusement park rides, and the gift of a frog made entirely out of seashells. We fell madly, passionately, head-over-flip-flops, and I had my first ever French kiss when we made out on the porch of her motel the night before she and her family returned home. I ached horribly the entire, rainy drive home, and knew that someday, somehow, we’d be together again and for all eternity. She sent me a few perfumed letters over the next year or so, and then, as these summer romances go, vanished from my life forever. Until, that is, I resurrected that glorious angst in “Summer Song,” my episode which was named after a Chad & Jeremy song. In it, Kevin meets a beautiful blonde girl on the beach (played by Holly Sampson who went on to a career in porn of all things)—an older woman, no less—and ultimately shares a tender kiss with her under the boardwalk. 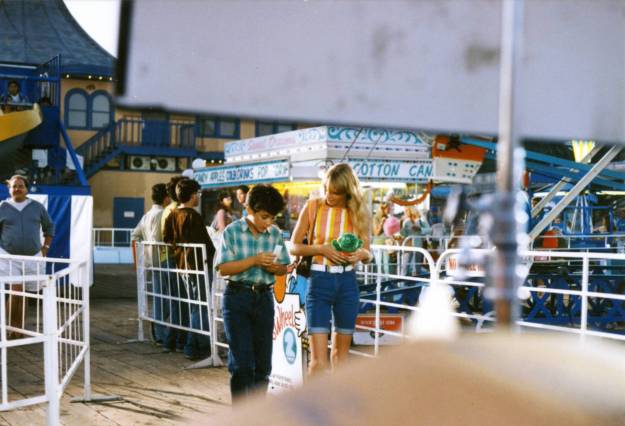 The thing is, I thought my script didn’t measure up to the quality of the show. The Wonder Years was one of the best written series on TV—who the heck was I to think my work would be good enough? My incredible wife at the time, Cayce Callaway, vehemently disagreed and famously vowed that if I didn’t send the script to Sylvia Hirsch (my then agent at Preferred Artists in Encino), then she would. So I mailed it off, begrudgingly enough, and was subsequently shocked when, a few weeks later, Sylvia (rest her soul) called to tell me that the producers had actually liked it and wanted me to come in and pitch.

The rest, as they say, is my-story.

I joined The Wonder Years as a staff writer at the beginning of season three, and left some three years later just prior to the show’s final season. In that time, I was fortunate enough to have a writing credit on seventeen episodes—some which I’m still really proud of, and others, well, not so much. I did a lot of writing on the show, both credited and uncredited, and it was the best boot camp an aspiring television writer could ask for. After I resigned and moved on, I never really looked back, but in the ensuing years the question I was most often asked was: “When’s it coming out on ‘home video?’/DVD?” And I’d always explain that I had no idea because all of that great music that helped make the show what it was in its initial run had to be re-licensed which was a daunting and nearly impossible task. You see, as the 1980s became the 1990s, no one envisioned a day when people might want to actually own an entire television series on bulky VHS cassettes, so the music was initially licensed for network broadcast, reruns and, I’m guessing, syndication. I don’t know if the latter had the original music or not because the handful of times I tried to watch an episode on ION or wherever, I couldn’t get through more than a few minutes because they’d been savagely butchered to make room for more commercials. It’s still astonishing to me that the original show had one—and I mean one—act break right in the middle. Two acts. One commercial break. Yes, those were simpler times.

Fred Savage reacting to the news that I was leaving the show’s writing staff. Photo copyright the author.

And now Time-Life and StarVista Entertainment have finally accomplished the impossible. They have  released the entire series—all 115 episodes—on DVD with most of the original music. Apparently, some artists (I’m looking at you, Neil Young), either refused to license their tunes or maybe demanded astronomical payments. Wikipedia has a good list of all the music that was replaced along with the titles of their substitutions here, saying that the new DVD release retains 96% of the first-run music.

Which, I have to say, is far better than no DVD release at all. Though I’ll admit, the absence of Richie Haven’s cover of The Beatles’ “Here Comes The Sun” from the episode “Heart of Darkness” made me die a little inside when I recently rewatched it. In one of my absolute favorite scenes from the show (oddly from one of my least favorite episodes), Winnie comes over to find Kevin and Paul sitting on the curb in front of his house as another school day lingers before stretching into dinner time. She’s wearing her cat-eye glasses, and Kevin and Paul tease her saying “You definitely look stupid in contacts” or some such, and it’s such a perfectly real, tiny, relatable moment in time you can almost believe it happened to you and not the characters on the show. The music was so perfect that I made sure to include the scene in a clip show that Mark Levin and I wrote and produced at the end of season four. Sadly, it’s been replaced in both episodes of the DVD release, but if I’m ever feeling especially hardcore, I can always bust out my VHS of the original broadcast. Being the antiquarian-contrarian that I am, I still have a working player connected to my TV. I may have to do the same with “Family Car” when I finally get to it. Hard to imagine that amazing montage with anything but Neil Young’s “Long May You Run.” 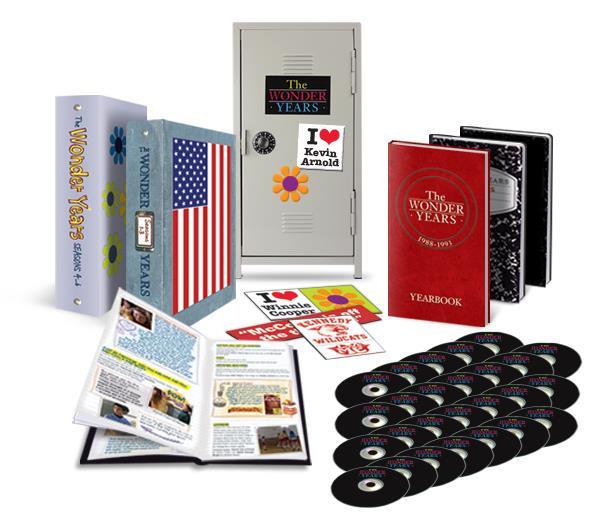 Music quibbles aside, the rest of the release is simply superb. I’ve read online that some videophiles are disappointed in the image quality—but the show was originally filmed on 16mm and edited on BetaMax and was never intended to be shown at 1080dpi on a plasma flat screen. If you ask me, all things considered, it looks pretty damn good—certainly better than the episodes streaming on NetFlix (with nasty, bad music substitutions). The set is housed in a metal school locker with notebooks that hold the discs along with a yearbook with additional information about the series. The new release also contains hours and hours of delicious bonus material, all of which demonstrates that the folks who produced the set had a deep and abiding adoration for the show that shines through even in the packaging. The cast reunion and interviews are particularly charming, and I’m thrilled that my on camera interview was used throughout the fantastic featurettes, and that the producers of the DVD set gave me the last line of narration by making my full interview the final segment in the whole set.

The Wonder Years has assumed its rightful place among the greatest series in the history of television, and I still honestly have a hard time believing that I was blessed to have been one of its many contributors. Sure, I’m biased, deeply so, but that doesn’t change the truth that this is one of the best DVD releases I’ve ever come across, and if you’re even marginally a fan of the series, you won’t be disappointed. My connection to the show is rather profound and personal, and rewatching the episodes in order has been particularly poignant for me. While The Wonder Years initially evoked a universal nostalgia for the angst and innocence of youth, it has now taken on even more significance for me in that it perfectly enshrines the bittersweet beginning of my career, of a time when I shared all of my life-altering experiences with my dearest friend Cayce as we, too, grew up together and became adults.

So there you have it. The Wonder Years was truly a second adolescence for me, and with this gorgeous release of the show on DVD, I couldn’t ask for better home movies of that particular time and place in my life. Well done, Time-Life and StarVista, well done, indeed. Stay tuned…

You can purchase The Wonder Years: The Complete Series by clicking here.